Remember Herman Darvick?  A problem in the hobby for decades. The problem started decades ago when he was actually president of the Universal Autograph Collectors Club. Didn't last too long, he was expelled from the club for very serious ethics violations. 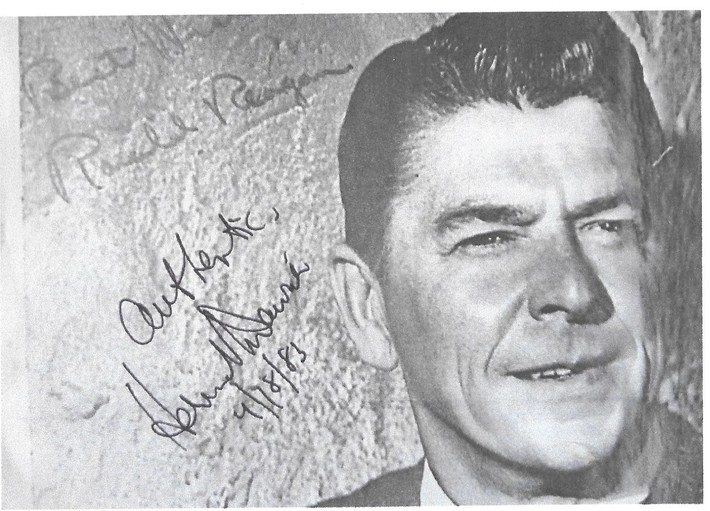 After many years of denial, at last Herman Darvick admitted he forged autographs.  He did so in front of many collectors including me.  It appears Darvick is authenticating his own forgeries.  See the Ronald Reagan signed portrait.  It doesn't take an expert to see that the Ronald Reagan signature is not genuine. The "o" to the "n" and the "l" to the "d" needs a lot of improvement.  This item is authenticated "Authentic" by Herman Darvick.

In the folowing handwritten note by Herman Darvick, pay attention o the last line.  Focus on the word "Read."  Examine the "R" in Read and go back to the signed portrait of the authenticated Ronald Reagan portrait.  Look at the "R" in Reagan. It certainly appears that the "R" in Reagan and the "R" in "Read" are by the same hand. In Darvick's handwritten letter above, he admits in a kids book he wrote on autographs that "you will never be able to guess which autographs in this book were actually signed by me. There are two of them."  I had a person who is considered by the autograph community to be an expert to take a look at the cover of the book.  This expert has written books on autograph collecting and his expertise is baseball. His response to the signature of Babe Ruth on the cover is "Not even close."  More on sports forgeries later. Herman Darvick on two different occasions has written in front of me the following. I still have the originals "11-20-63  Dear Lee (Harvey Oswalld) We'll be in Dallas on  Friday, Don't forget our deal! Lyndon B. Johnson."  Darvick actually said "Someday you can retire from one of these." On a separate occasion, at a New York UACC autograph show, Herman was acting proud how he thought he could imitate presidential signatures. In front of me he signed the Nixon, Carter and Ford signatures illustrated below. 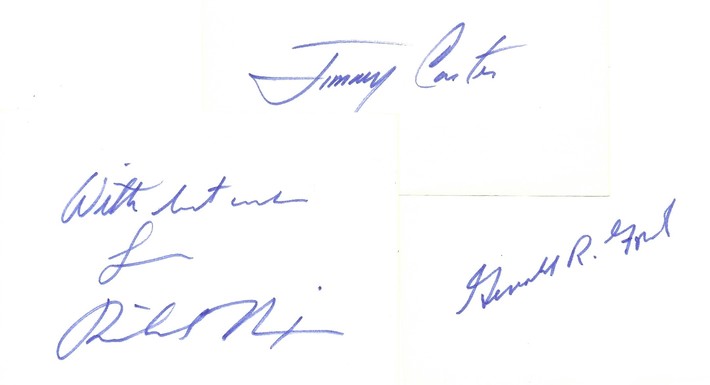 I claimed the $1,000 prize from Darvick, he never responded. The following email from Darvick admits he forged autographs. 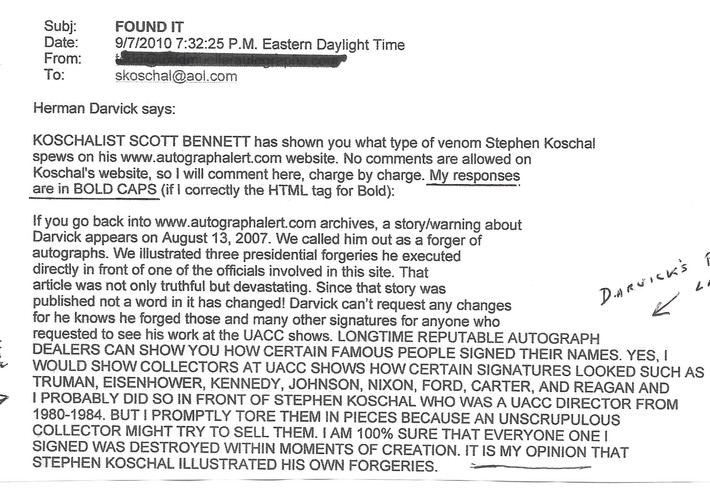 One of the scarcest signatures in baseball are those of Shoeless Joe Jackson.  Most dealers and auction house never had one or even  seen one.  When Darvick was running an auction house in New York City, it appeared he had an unlimited supply.  Most experts said they were forgeries and there was a popular site on the Internet that had stories about the forged Jackson signatures and they appeared frequently.  After some bad publicity, Herman stopped selling them. The  idustry was determined to find Darvick's sources of the Jackson signatures. Even recently, I requested on three occasions that Darvick clear his name. If he didn't sign the Jackson signatures than just state who were the consignors. All three attemps received no response. It does't end here, another study had been done on all the Salvador Dali  and Marc Chagall signed prints Darvick has introduced in to autograph hobby.