eBay is the place only a seasoned autograph collector should even attempt to purchase an autographed item. Collectors should never be fooled that an item that comes with a “COA” will be genuine.  Many COA’s (Certificates of Authentication) are as fake as the autograph that comes with it.  THIS ALSO GOES FOR ALL THOSE ABC TYPE COMPANIES WHO CLAIM THEY AUTHENTICATE AUTOGRAPHS. How many collectors that got fooled with the “COA” scam no longer collect?  When the collector attempts to sell the autograph at a later date, discovered the autograph was fake.  They gave up collecting.  This is just one reason that the PADAH (Professional Autograph Dealers and Auction Houses) was created.  Since the time PADAH was created, not a single complaint was filed against one of their members.

The following is just one sad reason to avoid eBay. One can bet, if even noticed the $69.00 photo is a steal.  Steal might be the right word being used and that’s what happens when the collector buys the $69.00 photo.  Their money was stolen.  See the close up of the sentiment and signature of Mother Teresa. 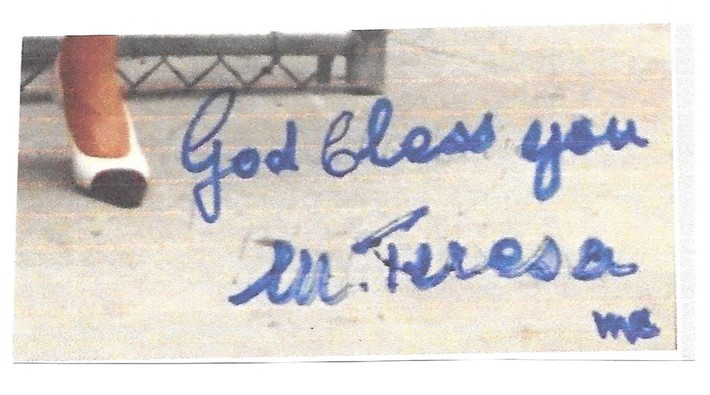