(Beckett)  to a Conference on

Most likely the worst thing that has happened to the autograph hobby is the proliferation of what are called autograph authenticators. There are hundreds of them and most all are totally worthless.

The Certificate of Authentication Library has countless numbers of original COA’s along with the original autographs they have authenticated.  Most are issued by unknowns.  Nearly all refer to forgeries or preprints authenticated by authenticating imposters.  The library contains numerous forgeries  certified as genuine by a handful of a few high profile sellers of autographs.

This study is to focus on one of the top three high profile companies who claim to authenticate autographs.

The person to be focused on is Steve Grad who is said to be the lead authenticator for Beckett Authentication Services (BAS).

A little background on Steve Grad.  He claims he had handled millions of dollars of autographs. This is true, he worked in the mail room at a Chicago Auction house preparing autographs to be mailed to the winning bidders.  Steve Grad was removed from the Chicago National Sports Convention for selling forged autographs.  In a court appearance, Steve Grad did not recall the incident.

The autograph we will dissect is that of Mick Fleetwood of Fleetwood Mac.  Mick’s genuine autographs are very desirable and somewhat uncommon, therefore actively forged.  I strongly suggest Steve Grad also takes this course.

To begin, I will illustrate a genuine signature of Mick Fleetwood. See below. 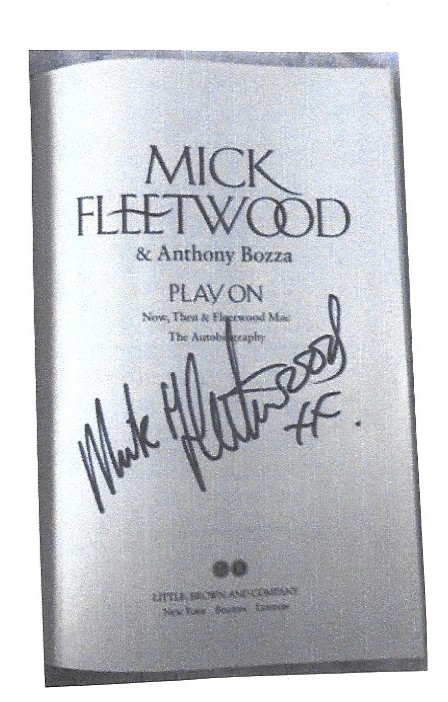 Study the signature carefully. Try to remember the clarity of the signature. Look at the sizing of each letter, look at the angles, spacing,  letter formations and whatever catches you eye that you can remember.

The example illustrated below should convince you to only purchase an autograph from a professional dealer who is a member of PADAH. You have many dozens of choices.

This dealer on ebay states for $12.90 you will receive this “signed” photograph which is a reprint. 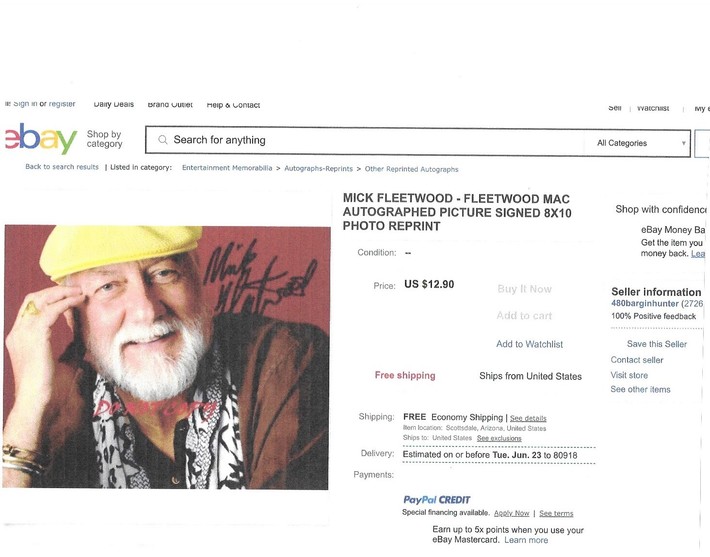 The next illustration is an identical “signed” photograph being sold as genuine. The seller states this piece of memorabilia “is guaranteed to pass any third-party authenticator.”  The seller is probably right! 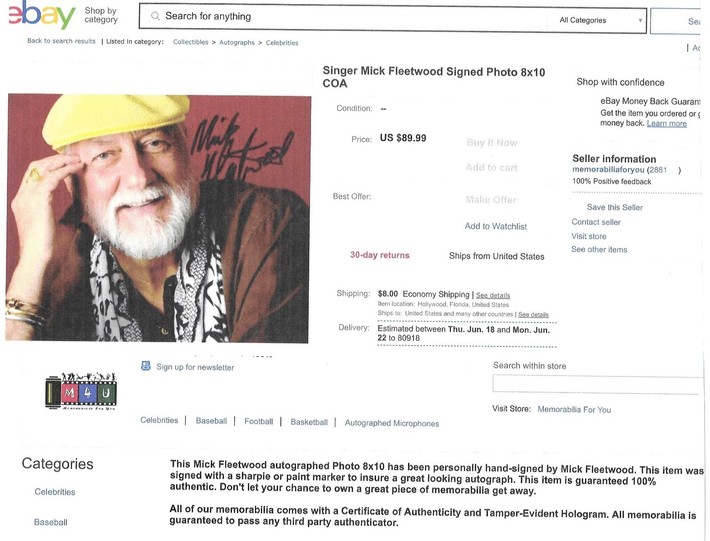 A mere bargain at $89.89 as a genuine.  Mick Fleetwood signed photographs should go for more. 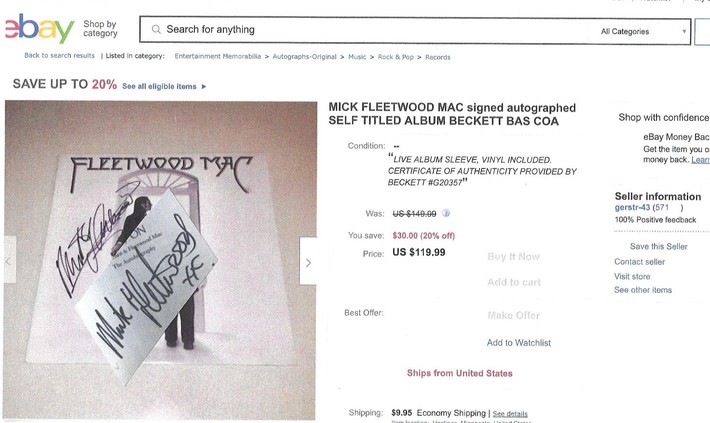 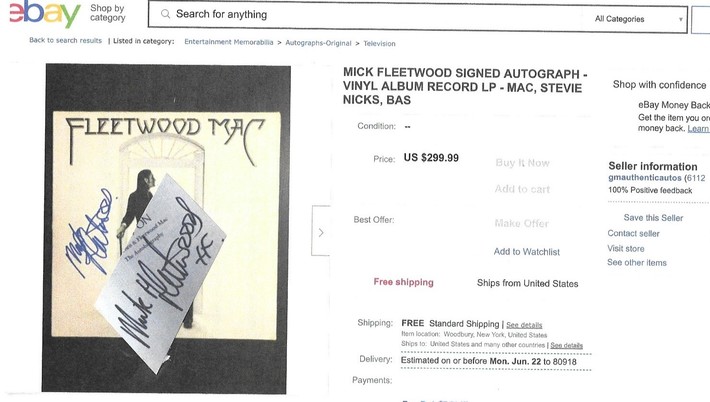 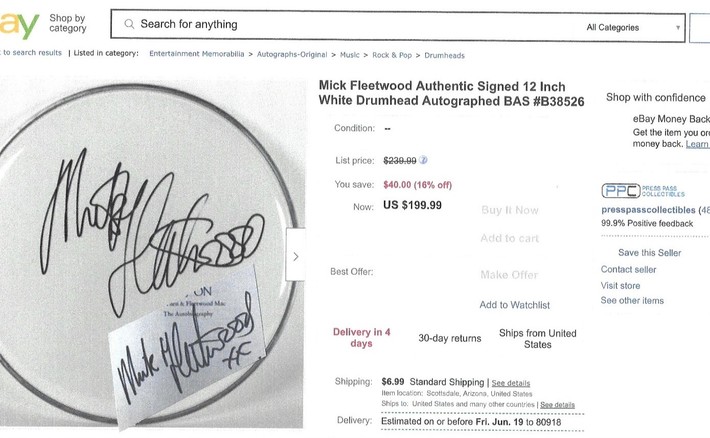 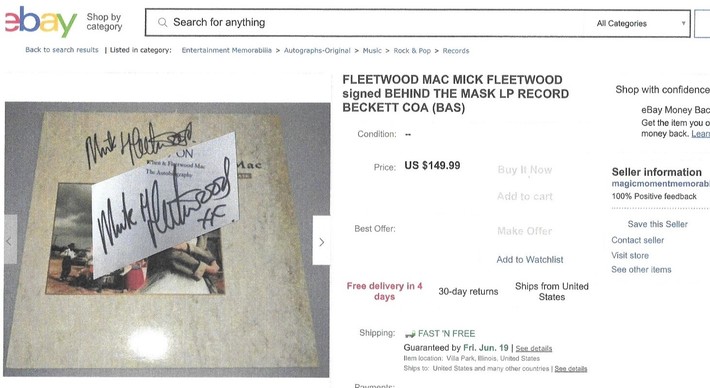 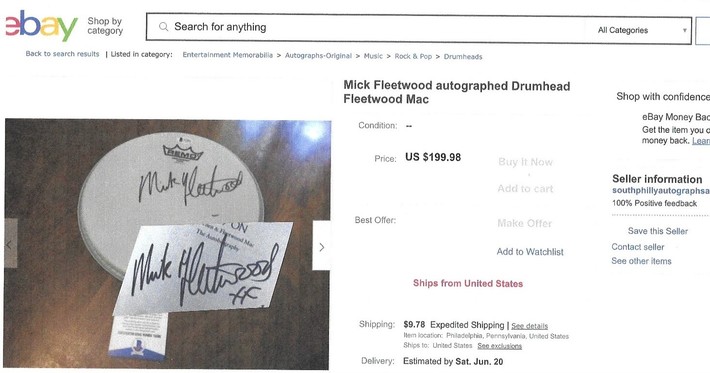 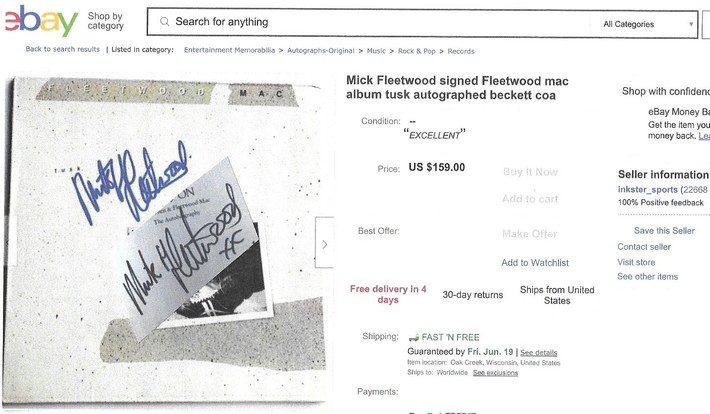 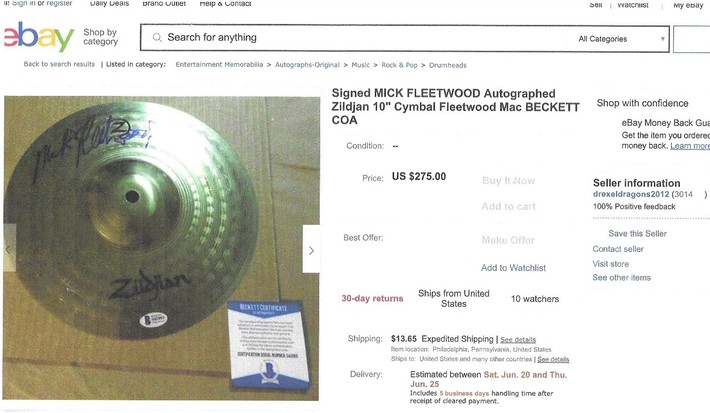 And finally illustration # 10 below….. 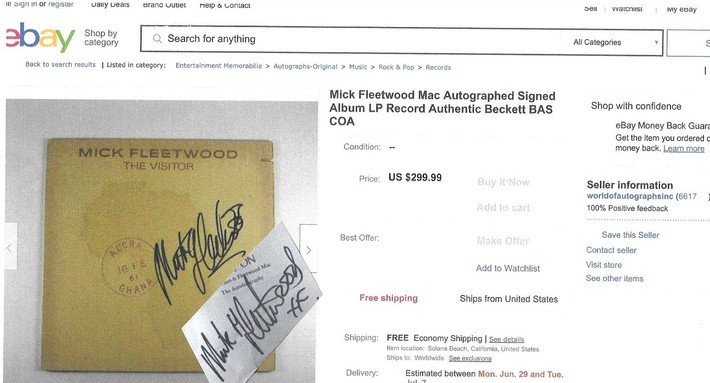 OK, the course is basically over.  I’m sure many of you have made up your decision way before you saw illustration #4.  Through the year’s, forgers have been better at their trade. However, in this study you may have noticed some even spelled Mick Fleetwood’s name wrong.

Out of the ten illustrations above certifying Mick Fleetwood’s signature as genuine, can you pick even one that you would spend your hard-earned money?

How can anyone, especially a hired and given the name “lead authenticator” make such a mess out of Mick Fleetwood’s autograph?

Some believe that there is much competition within the three high profile companies who “claim” they can authenticate autographs.  Some are trying to steal clients from their competitor.  Others say it’s all about the money.  If possible, make the signature authentic and keep the customer happy.  Fail it and the customer will find another authenticator.

Steve Grad needs to explain the mess above and other we have in our files.  We would like to hear his explanation for the 11 decisions illustrated above.

This is a request for Steve Grad to join Stephen Koschal in a recorded conference at a hotel located near his office.   The meeting should take no longer than ninety minutes. Possibly 25 questions will be be asked. The tape will be played on www.theautographplanet.com

Best for the hobby, possibly he can convince the International Autograph Community of his expertise. This opportunity could only be positive for Steve Grad and the company he represents.  An email to Steve Grad has been sent to Beckett Authentication Services requesting the conference.