Another member of the White Hat gang goes to jail.  Eric Santonauro according to James Spence was a super valuable employee to JSA authentication.  According to an insider who has seen third-party scams upfront Eric Santonauro stole over $100,000.00 worth of memorabilia that was to be authenticated by JSA.  Unfortunately for Eric Santonauro video surveillance was in the store catching him stuffing six figures worth of autographs down his shirt and into his backpack when he felt no one was looking.  He claimed he was taking the material which included a document signed by Oscar Shindler to the home office for further evaluation.  But he never informed the store owner or the submitter of his intentions when he stuffed six figures of product down his shirt and walked out of the store with it.  Video surveillance doesn't typically lie.  While the only surprising thing about this is that more of the White Hat gang hasn't been thrown in jail yet. 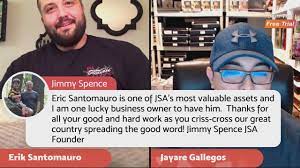 According to an insider James Spence is claiming no wrong despite Eric working for him at the time of the theft of six figures worth of submissions.  It is unclear if JSA still supports their "one of JSA's most valuable assets" or not.  Will they be bailing him out of jail so he can continue to in James Spence's own words;  ...."criss-cross our great country spreading the good word?  What is the good word exactly?  That they come to steal your property? 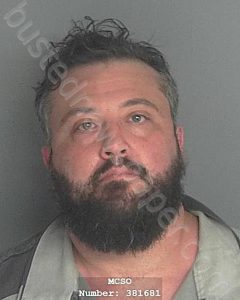 Eric Mugshot in Montgomery, Texas where he was arrested on May 28, 2021 in Montgomery County, Texas.  According to a police website.  He is still in jail.

According to the arrest report, he was a "Fugitive from Justice".  This makes sense.  It's tough to get these authenticators when they travel all over the country like a carnival guessing on this and that.  James Spence may be hiring all losers soon.  Only requirement is probably; "A PULSE"

The insider also stated another criminal Steve Cyrkin is giving Eric advice inside prison life.  So far it's not too helpful when one insider heard him state; "Kill the story, don't let anyone write about the truth.  Tell Eric not to drop the soap!".  This newest update should make all white hat gangsters shake in their rubber boots and ten gallon stained cowboy hats as to which of them is next?  Stay tuned for more truth here on theautographplanet.com

This is a great day for autograph collectors.  Another insider stated he paid to have Eric fail 88 items.  Later that month James Spence passed all 88 items as genuine.  He was fortunate, he only had to pay twice for two completely different opinions within the same company of JSA.  One just can no longer make this stuff up.  You just have to scratch your head and go "What the hell"?